This is a collection of Land and Sea Scapes from around Ireland.
I spent two years living in the breathtaking countryside of West Cork, from here I ventured out almost daily, often ending up in other counties, here are some of the spectacular Irish Countryside I encountered.

Taken on the hill above Cooncrome Harbour, with a small brook cascading its way down the the rocky shoreline, taken in the height of summer on a spectacular Irish day

This photo taken in Tousist, Co. Kerry on a calm summers day, is located just in front of The Lake House Bar

This Abandoned Rail Bridge is located just on the Edge of Cahersiveen, Co. Kerry. Nature is slowly reclaiming this structure through rusting from the salty wind blowing in from the Atlantic Ocean

This fantastic spot, located just outside Kenmare on the Caha Pass Road, captured in early Autumn giving a classic mix of greens, orange and yellow foliage.

Taken from low on the rocks along the channel that leads to Lough Hyne, West Cork. No two days in this magnificent area are ever the same. 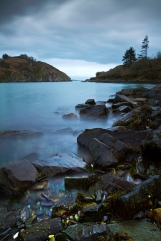 This wintery image taken in November at the gateway to Lough Hyne, from the rocks of Barloge cove, West Cork, was captured in late evening as a storm brewing on the Atlantic started to roll in
Loading Comments...